Walter Francis became Duke to one of the largest estates in Britain at the young age of 13 after the death of his father Charles.  His uncle Henry, Lord Montagu, and family friend Sir Walter Scott became his guardians.  Together they watched over his development and education.

Walter Francis had a far from gradual introduction to the life of a Duke and had many important duties at a young age.  By 16 he had attended the funeral of King George III, and only two years later he hosted King George IV at Dalkeith Palace for the first royal visit to Scotland in nearly two centuries.  These events set him in good steading for his long life as Duke of Buccleuch.

Born in 1811, Lady Charlotte Anne Thynne was the youngest daughter of the 2nd Marquess of Bath.

She was brought up at Longleat in Wiltshire and taught at home by a private tutor.  She was educated in reading and writing, languages, music, dancing and needlework.  But she also developed a great love for art and gardens which became apparent later in life.

The Duke and Duchess met when the Duke was visiting Lord Bath.  According to a contemporary journal of the day, The Lady’s Realm, their engagement had been ‘romantic’.  Apparently, as the Duke left he noticed tears in her eyes.  This prompted him to turn his coach around and approach her father directly to ask for her hand in marriage. 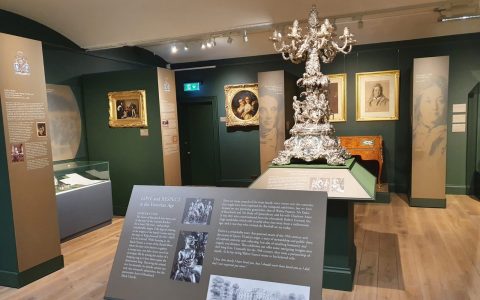 Discover the lives of the 5th Duke and Duchess

Their lives together – Love and Respect

The Duke and Duchess were married at St George’s, Hanover Square, in London on 13th March, 1829.  They had 8 children together, but sadly, Francis, the fourth born, died young.

The Duke and Duchess enjoyed Victorian life.  When at home together they often held dinners, and dances.  Hence the need for such a big Victorian Kitchen!  This love for entertaining, their large family and their status in society also meant that there was a need for elaborate porcelain, tableware and silverware – much of which you can still see at Bowhill today.

Collecting was one of their joint passions.  In addition to the collections of porcelain, tableware and silverware mentioned above, the Duke and Duchess also collected a lot of French furniture and art. In particularly, a significant numbers of portrait miniatures.  Part of this collection can be seen at Bowhill on a guided tour.

In addition to Walter Francis hosting the royal visit in 1822, the Duke and Duchess both had important roles with Queen Victorian and Prince Albert and were very much part of the Court.

This meant they spent long periods apart but they wrote to each other religiously.

Charlotte Anne served as Mistress of the Robes from 1841 to 1846.  It seems Queen Victoria and Charlotte Anne were also good friends.

Prince Albert and Walter Francis also had shared interests and he appointed the Duke as a commissioner of the Great Exhibition in Hyde Park in 1850.

The 5th Duke and Duchess spent a lot of time at Bowhill and were instrumental in turning it from a simple hunting lodge to the home it is today.  Their legacy was a lasting one that spans the Scottish Borders and further afield which we hope to touch on in another blog in the future.

However, to coincide with Valentines month it’s heartening to learn their story was truly one of love and respect:

As Walter Francis neared the end of his life, he reflected to his ‘dearest Char’, that, ‘I would never have loved you so much had I not respected you more.’